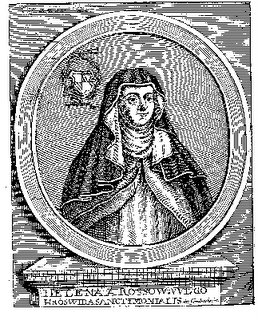 Hrotswitha von Gandersheim lived from c. 935 CE to c. 1000 CE, and was a canoness at the Benedictine abbey in Gandersheim (Saxony). As a canoness, Hrotswitha didn't take a vow of poverty, and had freedom of movement not allowed to nuns. This freedom of movement, and freedom from poverty, allowed Hrotswitha to access the best of both secular and religious life in the city. Hrotswitha was fully educated in the 7 liberal arts at the abbey, and it is very clear from her writing that she had access to all the standards of classical learning available at the time. She credits her education to the nun Rikkardis, and credits her abbess, Gerberga II (Otto II's niece), with encouraging and even commissioning her writing. We're not sure of Hrotswitha's age when she entered the convent at Gandersheim, but we do know that she came from a noble family; Gandersheim accepted only noblewomen. We also know that Hrotswitha enjoyed a friendship with the emperor Otto II and his Byzantine wife Theophano, and that the princess Sophia was sent to Gandersheim to be educated.

Hrotswitha is the first European woman that we know of to have written literary works. She's also the first European person since the "Fall of Rome" (scare quotes courtesy of my unwillingness to say that the Roman empire ever really fell) to have united Christian subject matter with pagan dramatic structures to create Christian drama that didn't totally suck. She was a one-woman Renaissance, you might say. Hrotswitha tells us in her prefaces to her works that she was appalled by the study and performance of pagan drama and comedy for a few reasons, not the least of which was the lascivious and fundamentally misogynist depiction of women in these dramas. So, in creating her own literary works, she centered on the power and value of women with regard to a Christian society. She was also -- I'm sure-- responding to misogyny in the Church itself, as the tenth century was a time when the newly solidified Roman Church was trying particularly hard to discredit and silence women through depictions of women as naturally wicked and hypersexual.

The first few works Hrotswitha wrote were not plays, but Christian legends that drew heavily from Byzantine hagiographical models. Her Maria and De Ascensio Domini portray Mary as the prototype for Christian feminine strength as Hrotswitha sees it. Mary is a strong and virtuous woman who will not yield to improperly invoked masculine authority. In Gongolfus, the holy man's wife is just as lewd and prideful as any other church figure would draw her, and God punishes her for her pride by having her fart every time she attempts to speak. Not exactly pro-woman, but it does give the power of silencing the wicked to God, rather than man. Pelagius (not the heretic, he was earlier) is the depiction of a contemporary Galician martyr who died in Spain under the rule of Abd ar-Rahman III. What interests me in this Life is the sexual nature of Pelagius' persecution (she writes ar-Rahman as a pederast), and the fact that the strength she credits Pelagius with changes from masculine strength in volunteering to be a hostage for his defeated father (she got that wrong, it was his uncle) to a stereotypically feminine and virginal refusal to comply with male authority and over-reaching male sexuality. Theophilis is a very early Faust myth, in which the protagonist pledges his soul to the devil for assistance in righting a wrong done to him, but is saved by the Virgin Mary after purifying himself.

In the six plays she wrote to replace the six plays of Terence, entitled Gallicanus, Dulcitus, Calimachus, Abraham, Pafnutius, and Sapientia, she centers on the virtue of chastity, but defines virginity as a lack of intent and desire. So, although God does intervene on behalf of women who are about to be raped, women who have been raped and forced prostitutes may still consider themselves virgins because they never willingly engaged in sinful acts. It is male hypersexuality against which women must defend themselves in these plays, and God's intervention makes good fun of the lascivious men who would harm virgins. (Dulcitius, for example, becomes confused through God's intervention and "rapes" the pots and pans in his kitchen.) Yes, this is a short paragraph, but I know more about hagiography than Christian plays.

For you history types (Hi!), she wrote two histories as well, one Gesta Ottonis I, imperatoris, in which she describes the life of Otto I, but also sort of flips historiographical interests in her writing of his life. She largely disregards battles (always so interesting to history-writers of her time) and writes at length about the queens who were generally disregarded by medieval historiographers. Her second history is a chronicle of her abbey at Gandersheim, Primordia coenobii Gandesheimensis, in which she depicts the work of the women involved in the founding and development of the abbey as central, and the men's work as secondary. This is probably a natural development of the place being a women's house, but most medieval history would have fussed on and on about the local bishop, and ignored the women.

My love for this woman comes not only from her desire to defend the role of women in Christianity at such an early stage, but from her absolute refusal to feign idiocy. In fact, she considers her intellect a gift from God that she is required to use. Doesn't get better than that in the tenth century, folks. "He has given me the ability to learn -- I am a teachable creature -- yet of myself I should know nothing. He has given me a perspicacious mind, but one that lies fallow and idle when it is not cultivated. That my natural gifts may not be made void by negligence I have been at pains, whenever I have been able to pick up some threads and scraps torn from the old mantle of philosophy, to weave them into the stuff of my own book."

Opinions, however, are mine. Unless they're silly, then it's somebody else's fault entirely.
Posted by Heo at 12:57 AM

Email ThisBlogThis!Share to TwitterShare to FacebookShare to Pinterest
Labels: Medieval Women I Adore